The Feldenkrais Method is Probably Not What You Think

Many people think the feldenkrais method is some kind of Yoga. Others say, "Oh it's like physiotherapy". Still others are convinced it's a cult!

Oh no, my pretties. The feldenkrais method is none of these things. It is a special creature and it doesn't fit neatly into any of these boxes that we try to put it in...

And like all special creatures, the best way to understand them is by listening to a little story about them.

So let me tell you a tale of my discovery of the Feldenkrais method. I tale I am glad to share because I feel so blessed to have found this method. It marked a big turning point in my life when I did. Learning about the method and practicing it has taken me on a journey I could have never expected or prepared for.

I found myself in a situation in my mid 20's where I was unable to walk due to inflammation in my joints. My knee and ankle were so fat and fluid-filled that they could barely bend.

And being the stubbornly independent bastard that I was, I wanted to fix it myself. I experimented with dietary changes mainly because I knew there was a connection between it and inflammation...

Weeks went by and nothing much was changing.

Fortunately for me, lying on the couch avoiding painkillers for fear of their poisonous side-effects turned out to my advantage. It produced a facial expression sufficiently miserable enough to annoy my mother-in-law into going out and hiring me some crutches.

Having the freedom to move faster than my normal walking speed convinced me that perhaps accepting help wasn't such a bad thing after all.

So I went on a treatment binge. I tried many different practitioners. After a year-long journey with limited success, my physiotherapist finally recommended I give Feldenkrais a try.

So I did. And blimey, it worked miraculously well after just one session. I was amazed at the immediate and lasting improvement!

But even more surprising was that it was my eyes that were causing the pain in my leg!

Yes. My left eye had grown a little complacent and was just following my right eye around like a good little puppy. This had the effect of changing the way I held my head and produced a chain reaction all the way down to my leg.

My curiosity was hooked. I knew that I had to take this exploration deeper! So I quickly signed up to the 4 year professional training program which just happened to be starting in a couple of months time.

To be honest, I got more than I bargained for when I made that decision...

I had expectations that it was about paying more attention to my body. And this was true, it helped me develop a DEEPLY intimate connection with my body. I understand it like never before.

I also thought I was there to get rid of my patterns of chronic pain and tension. And yes, I did. I've replaced those patterns with freedom and ease that feel so natural and so human-ish.

I had no idea there were so many secrets contained within my movement...

More on that later, but for now...

Let Me Tell You About The Creator Of The Feldenkrais Method 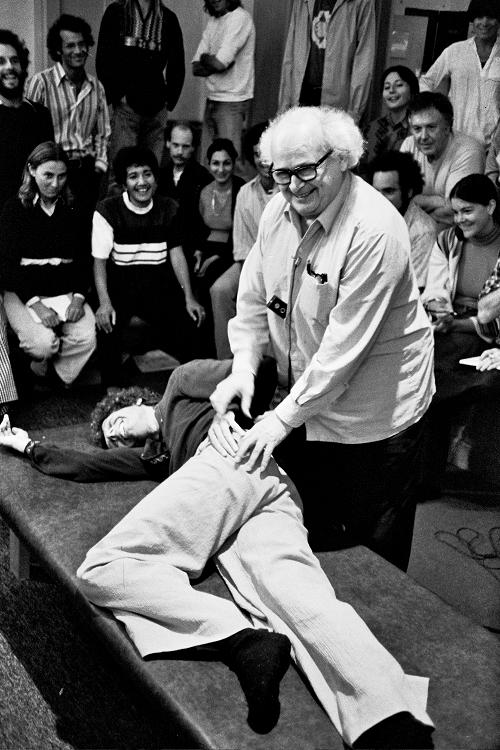 So, there was this guy... Moshe Feldenkrais. He's no longer alive, but I've watched video's of him.

He sometimes come's across as a grumpy old man. But he was also an amazing man with a heart of gold. "Genius" is a fitting word.

He was a scientist and engineer. He worked on stuff like nuclear fission and antisubmarine technology.

He was also a judo master.

At one point in his life he was dealing with chronic knee pain. (Look, we're like twins!!!) He decided that instead of following the advice of the standard medical model, he would figure out how to fix it himself. (Twins again!!!)

But here is where our paths diverge. He applied his incredible intellect to actually fixing and working through this difficulty with his knee. He drew from a wide range of backgrounds including biomechanics, neuroscience, anatomy and physiology, martial arts, engineering, child development, learning strategies and more...

He figured out how to walk again without pain. And through his discoveries and experiments he created what has now come to be known as the feldenkrais method.

To sum up the feldenkrais method...

It's a method of communicating with the nervous system by using movement. Through this process, change, learning and improvement happens.

Yes, I just quoted myself. Arrogant? Perhaps...but wasn't it a goodie! Did you notice the part about learning?

Learning is what makes the feldenkrais method the special creature that it is. You see, it's quite a different approach to the medical model way of thinking. It's not problem/solution focussed but rather an educational approach.

Rather than focussing on my knee as a problem, I was actually (unknown to me at the time) learning and upgrading my deeply held habits.

Feldenkrais helps us change our habits

We all have habits of movement that are so familiar to us we don't even pay attetion to them. Think for example - which shoe you put on first? Which teeth you start brushing first? How do you hold your head when you're looking at your cellphone?

Some of these habits can be "parasitic". They can fight against what we're intending to do, but at a level that is below our awareness so we don't catch them in the act.

Our habits are controlled by our nervous system. The way we can change these habits is by learning to feed new information to our brain through our senses. This is the thing that builds awareness and upgrades our movement

In my case my knee pain just disappeared at a certain point. I had gained enough awareness that I no longer was limited to moving in the way that caused pain.

I created new options for myself. New ways of being in the world which meant I wasn't limited by my habits anymore.

This also explains why, despite the fact that I've been blabbing on about knee pain, it's actually useful for a really wide range of people.

I've personally seen it help people with arthritis, cerebral palsy, pain and movement disabilities. I've also seen it improve the performance of athletes and musicians. But, it can basically help anyone improve...

Which leads me to...

The biggest changes from practicing the feldenkrais method

I mentioned earlier that there were secrets contained within my movement...

It's true. When I first joined the training all I could tell was...

It didn't seem much at the time, but I can now see that I was working with some big childhood coping mechanisms. e.g. Being a "good boy" and doing what the big people wanted kept me safe.

What has been revealed is that all of my patterns of anxiety are contained in the very way I move through the world. All of my hurt, sorrow, fear and shame can be seen in my movement. By upgrading the way I move, I change the way I find safety and comfort.

And while it has been difficult to see some of these parts of myself, I have compassion. I have learned how to work with myself, ever so sweetly, in becoming the human I have the potential to be...

How can you learn the feldenkrais method?

If you like the sound of what you hear and want to jump on the bandwagon, there are several ways to learn this stuff...

These are guided explorations through specific movement patterns. They are designed to help you learn how to explore your own body for yourself. These are the most cost effective way of learning Feldenkrais. They also help you to really own your learning because you've done the "hard work" yourself. The movements are usually pretty gentle and suitable for most people.

These are one-on-one body work sessions. In this setting, I would likely get you onto a table and begin to have a hands-on "conversation" with you. One-on-one sessions can be really good for working with specific difficulties that you might be struggling with.

If you're interested in coming for a session, you can book here...

There are also articles, video's and "exercises" on this website which is an alternative way of learning to use the method. I've done my best to explain what to do and how to do it, so that you can begin to explore yourself and develop an intimate relationship with your own body.

Have a look in the menu for reading material.